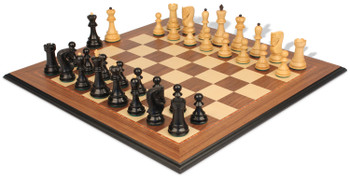 $229.00 This chess set package includes our Yugoslavia Staunton in ebonized and natural boxwood matched with our Walnut and Maple Molded Edge Chess Board. Our Yugoslavia Staunton is commonly referred to as the Zagreb and has been a mainstay in our collection for decades. This design became prominent in the 1950's when it was first used in the World Championship Candidates Match held in Zagreb in 1959. This is a medium size chess set with a 3.25 tall king and a base diameter of 1.375. Pieces are made from ebonized and natural boxwood and are heavily weighted for exceptional stability on the chess board. Thick green baize pads on the bottom create a soft cushion and allow the pieces to slide smoothly across the chess board. The uniquely shaped knight with its arched neck and turned down head is what distinguishes this chess set from others. As is often found on eastern European sets, the king, queen, and bishop finials are made in the opposite color of the main body.The rich brown color of the Walnut and Maple Molded Edge chess board make a wonderful backdrop against the jet black ebonized and cream colored boxwood pieces. This is an inlaid chess board made from the finest walnut and maple veneer and sealed with a semi gloss polyurethane finish to protect the wood. The precision of the inlay work is remarkable. The chess board has 2.125 squares accentuated by a beautiful sycamore delimiter and surrounded by an extra wide frame with a black molded edge. The overall size of the board is 17.5 and is .5 thick. Whether a collector or you are looking for one special chess set to display in your home, the Yugoslavia will enhance the pleasure of every game you play.Chess Pieces Ebonized Boxwood Boxwood King Height 3.25 King Base 1.375 King Weight 1.8 oz. Chess Set Weight38 oz. 2 spare queens are included for pawn promotion Green Baize PadsChess Board Material Walnut Maple Veneer over Wood Composites Finish Satin Polyurethane Sycamore Delimiter Around Squares Molded Edge Square Size 1.75 Overall Dimensions 17.5 x .5 Thick

The original Dubrovnik chessmen were commissioned by FIDE for the th Chess Olympiad held in Dubrovnik Yugoslavia now known as Croatia between.