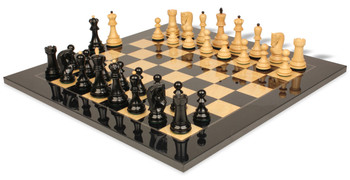 $319.00 This chess set package includes our Yugoslavia Staunton Chess Set in ebonized boxwood and boxwood matched with our Black and Ash Burl Deluxe Chess Board. As you can see from our photo, the chess set and board is a perfect match and the black and golden colors creates a striking contrast. Our Yugoslavia Staunton originates from the chess set designed for the 1950 Chess Olympiad held in Dubrovnik,Yugoslavia. This unique and handsome Staunton design has since become a favorite for chess players around the world and one of our most popular chess sets. We made a few minor changes such as adding a tapered base to enhance appearance and balance of the chess pieces while maintaining the integrity of the intended design. As with most of our chess sets, spare queens are included. Chess Pieces Ebonized Boxwood Boxwood Pieces individually hand polished with solid lacquer and buffing wheel King Height 3.875 King Base 1.625 King Weight 3.5 oz. Chess Set Weight 56 oz. 2 spare queens are included for pawn promotion Green Billiard Cloth PadsChess Board Material Black Stained Wood Ash Burl Veneer Wood Materials Finish High Gloss Polyurethane glass like finish Square Size 2.125 actual 55mm Dimensions 21.5 x 21.5 x .5 Imported from Spain, Rechapados Ferrer is the largest manufacturer and the most recognized name of high quality wood chess boards in the world.