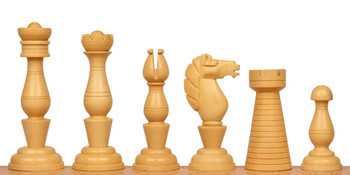 $249.99 This beautifully turned antique reproduction chess set was originally produced by Jaques way back in 1828 for the Simpsons Chess Divan in the Strand, one of London's oldest restaurants and a common meeting place for the greatest players in Europe. This is an English turned playing set and the pieces are accurately copied from the original pattern created by Jaques. Pieces are made from golden rosewood and boxwood and hand polished on the buffing wheel just as the original pieces were finished. In keeping with the integrity of the original design, these pieces are neither weighted or felted. The king is 5 tall and has a base diameter. Whether you use these pieces primarily as decor or your regular chess game at home, this unique chess set will add a sense of nostalgia and enjoyment to every game you play. Material Golden Rosewood Boxwood King Height 4.3 King Base 1.6 King Weight 1.5 Ounces Chess Set Weight 23 Ounces pieces are unweighted Pieces are not padded in keeping with the original design Recommended Chess Board Size 2.125 2.25 Squares chessboard is not included

The stands tall by 1 Base.

Part of our Timeless Collection it is exact reproduction of one of the most famous Chess sets in the world the Circa 1 0 Grand Cigar Divan Pre Staunton.